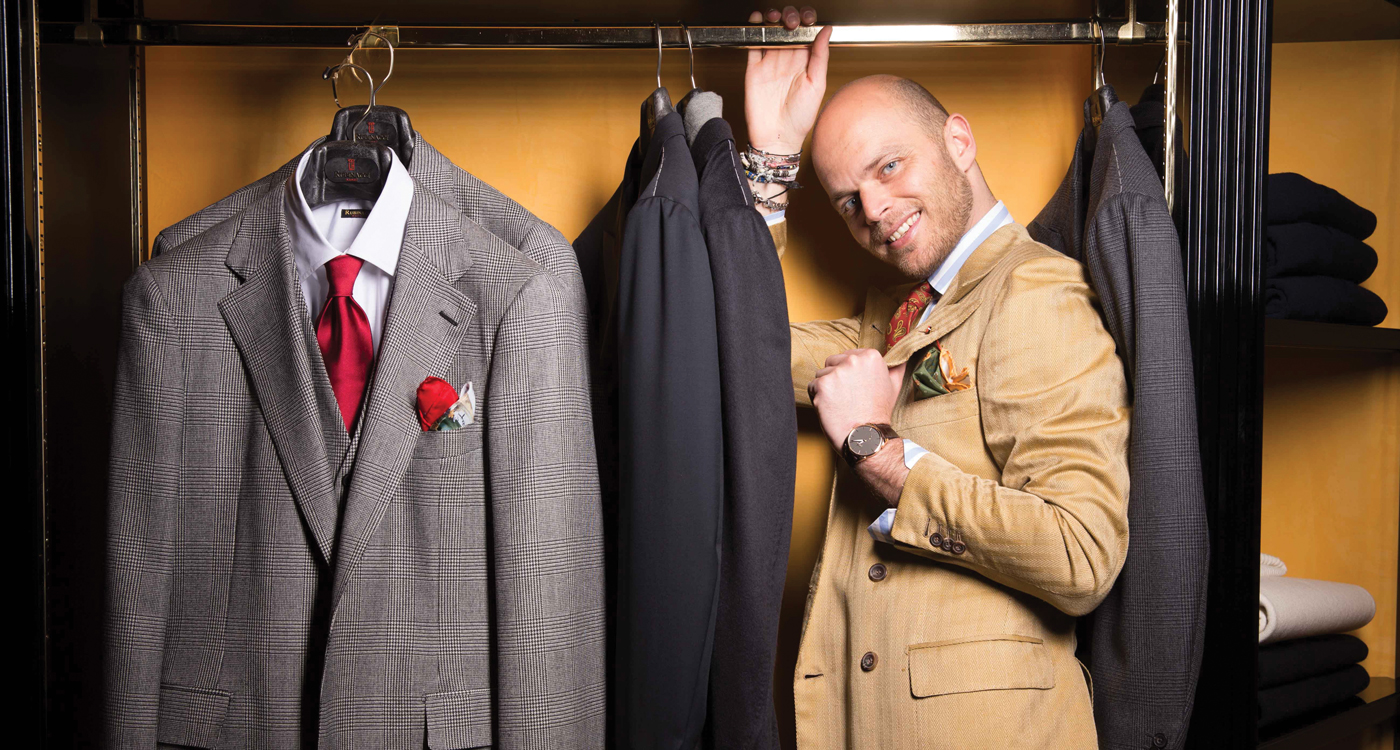 As Luca Rubinacci tells it, his family’s eponymous menswear label was selling aspirational Italian lifestyle decades before it was a thing. It just so happens that the whole concept is very desirable right now.

“Luxury today is all about uniqueness,” says the tailor and style icon who serves as the creative director of the label. “Any fashion label can achieve quality now, no matter where it’s manufactured. But what you can’t reach is the sense of style, the knowledge of what works and what doesn’t. This is something you either have or you don’t.”
The implication, of course, is that Rubinacci is in possession of this elusive sartorial je ne sais quoi. And it’s not an unfounded claim: Rubinacci’s clients include politicians, entrepreneurs, scions of business and industry, as well as those of a more artistic inclination (names you’d likely recognise).

Fortunately, pretty much anyone (provided they have 5,500 USD to dish out) can get a little piece of the action by getting fitted and placing an order for a made-to-order suit by Rubinacci’s team of tailors, all of whom are personally trained by someone bearing the Rubinacci name.

Furthermore, just to make sure clients really own their style, when a tailor finishes a Rubinacci suit, they sew in not the Rubinacci label, but a label with the customer’s name on it – “to give the sensation that it’s his own jacket, not ours.”

Rubinacci clients also have the added, very experiential option of staying in one of Naples-based Casa Rubinacci’s seven suites while waiting for the tailoring work to be completed (which takes about one week) dining at the family’s favourite restaurants and discovering their favourite Neapolitan hotspots. It’s an ineffable sense of indulgence in an off-the-rack, see-it-buy-it world, where taking things slow and in-person feels like the ultimate luxury. 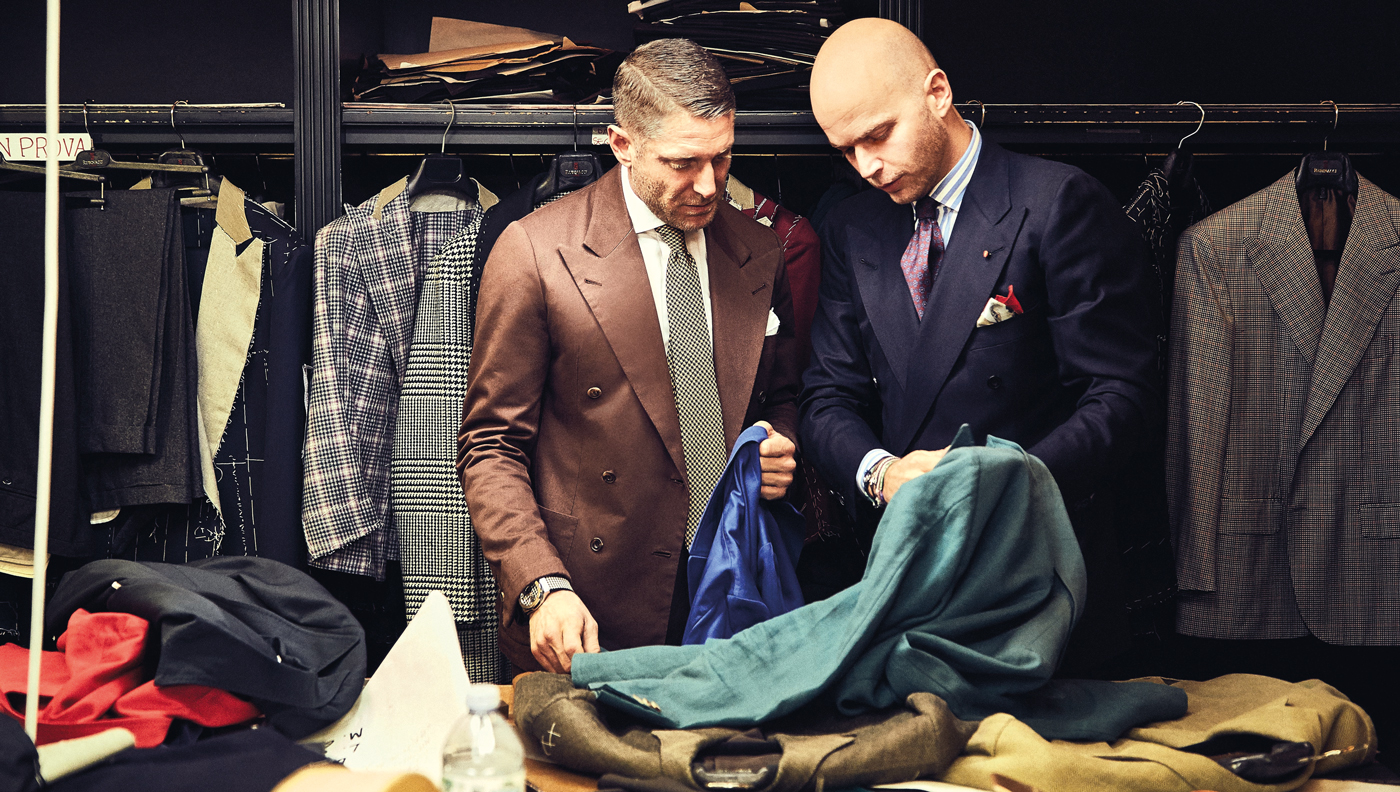 Lapo Elkann and Luca Rubinacci scour through materials in search of Elkann’s next custom-made suit.

ANY FASHION LABEL CAN ACHIEVE QUALITY NOW. LUXURY TODAY IS ALL ABOUT UNIQUENESS.

I reached Rubinacci via Skype at his home in Milan, where, he also has an atelier on Via Montenapoleone. He began by talking about the weather, which was beyond dreary and a marked contrast from his recent holiday back to his hometown of Naples. “The weather in Ischia was perfect, the water was amazing!” he noted with a degree of mild regret and a hint of dramatic effect. (A quick cross-reference with Rubinacci’s Instagram, where his colourful aesthetic is egged on by his nearly 128,000 followers, confirms that the water in Ischia indeed does looks amazing.) It was a conversational start to our interview, reflective of the genteel, courtly old-world manners to which he aspires.

In Naples, Rubinacci tells me, his name has been synonymous with style since the 1930s, when the King of Italy asked Rubinacci’s grandfather – “an art dealer with good dress sense” – to be a style ambassador of sorts between the tailor and the King.

“My grandfather was the inventor of the Neapolitan jacket,” Rubinacci posits. (For those unfamiliar with the difference between Neapolitan and English jackets, the Neapolitan is characterised by a relative lack of shoulder padding compared to the English and has a high, slightly smaller arm hole.) It’s a jacket designed for the king’s life of royal leisure; it’s for “someone who is not dressing to go to work, but dressing instead for pleasure.”

Third generation Luca Rubinacci, while drawing constant inspiration from his grandfather’s elegant legacy, has decidedly livened things up a bit. “When I came to the company 15 years ago, the average age of our customer was 55 to 60. Now it’s 30 to 35,” he says, proudly. 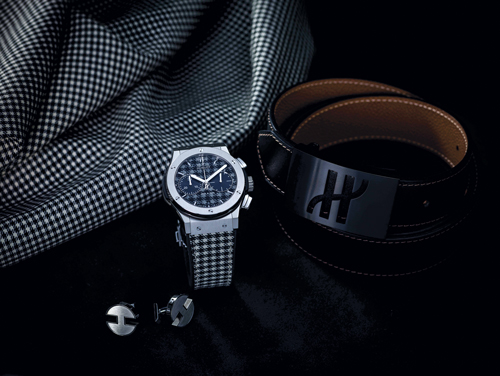 To achieve this generational leap, Rubinacci (who insinuated in an interview with StyleForum in 2014 that he would consider doing a collection for H&M) expanded to London (with a shop on Mount Street) and Tokyo (in Shinjuku), while also leveraging the most contemporary moves in the industry, including going digital with an e-commerce site, via Mr. Porter and of course utilising Instagram to its fullest – something which he clearly derives a great deal of joy in doing. He has also launched a more accessible ready-to-wear collection for those who want to bask in the Rubinacci glow, but on a smaller scale. (Prices range from 290 USD for a cotton button-down shirt to around 1,500 USD for a fully lined, two-button blazer.)

Rubinacci is also embracing the ubiquitous – and now seemingly indispensable – designer collaboration that has become the norm over the past decade. In February, the label launched a collection of timepieces in collaboration with Swiss watchmaker Hublot and long-time family friend, Fiat-heir Lapo Elkann. Hublot’s Classic Fusion collection comprises six different models in hound’s-tooth, tartan, and Prince of Wales patterns from Rubinacci’s archives, a store of over 60,000 square metres of fabric dating from the 1930s. Interestingly, the wool is incorporated into both the straps and the chronographs, showcasing Hublot’s prowess in working with unusual materials (especially considering the fact that wool sheds tiny fragments).

The collaboration came about as a result of a series of suits and jackets Rubinacci made for the colourful Elkann (who it should be noted has been included in Vanity Fair’s Best-Dressed List Hall of Fame and founded and serves as artistic director of Italia Independent, making him an entrepreneur in his own right). The grandson of Gianni Agnelli, the reputed playboy who ran a commercial empire that stretched from newspapers to Juventus via Fiat and Chateau Margaux, has long been a favourite of both Jean-Claude Biver (president of LVMH Watches and Jewellery) and Ricardo Guadalupe (Hublot CEO) making this a match made in fashion-marketing heaven. Price points for the collection range from around 15,000 USD to 31,500 USD.

The Rubinacci customer, though, is not just buying expensive apparel. Whether investing in tailor-made, ready-to-wear or a timepiece, Rubinacci, says what he is really selling is the confidence that comes with a well-developed sense of personal style. “Everybody knows we make the best jacket,” says Rubinacci jauntily. “The extra something is the service, the knowledge. We’re bespoke stylists that can build up the personal style of a customer, the knowledge of good sense and the beauty of good life.”