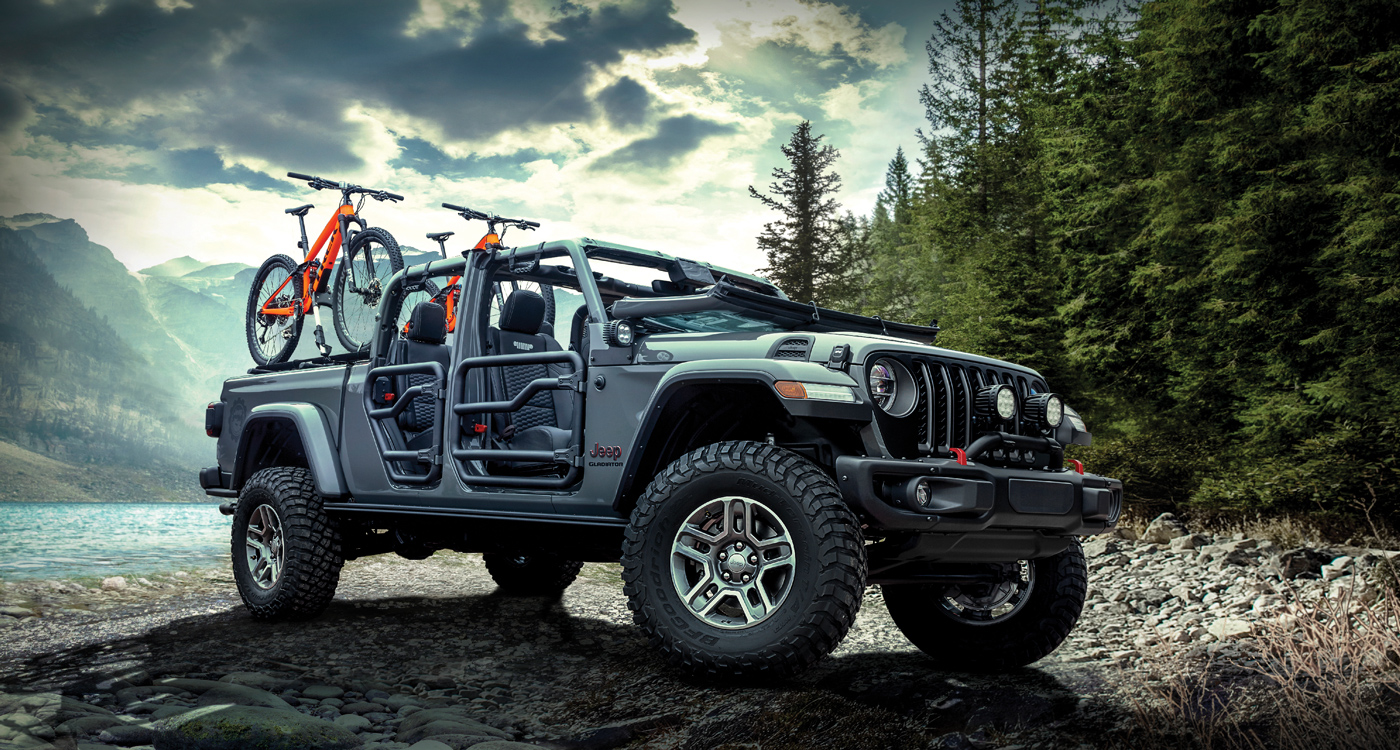 Jeep's New Gladiator is More Than a Wrangler with a Flatbed and it's Truckloads of Fun
March 7, 2019 Nicolas Shammas 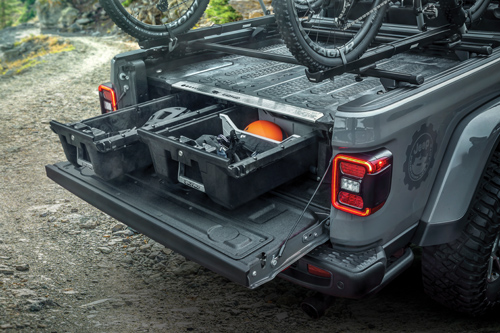 Such is the importance of the Gladiator to Jeep’s global customer base, and crucially not just its American one, that FCA (the acronym for the Italian-American Fiat Chrysler Automobiles corporation) thought fit to invite a handful of press from the Middle East to its global unveiling at the LA Auto Show.

Once there, the enthusiasm was obvious with hundreds of journalists jockeying just to get a decent view of the beast as soon as it emerged from a container set up in a specially erected tented theatre just outside the North Pavilion of the Los Angeles Convention Center. The Jeep team was clearly relishing the moment, unveiling not just one but three versions of the truck to the soundtrack of thundering rock music and a concert-worthy light show. The spectacle was enhanced by the fact they didn’t even bother installing ramps for these three trucks and instead had each one scale various obstacles before making their way to the stage – of course to reinforce Gladiator’s go-anywhere credentials. And then they had the bright orange ‘Punk’n Metallic Clear-Coat’ version emerge with two motorbikes hooked onto the back – again the message was clear: this boot is made for carryin’!

BUT TAKING BITS FROM THE FORMIDABLE NEW WRANGLER IS CERTAINLY NO CRIME, ESPECIALLY WHEN THAT MAKES THIS THE ONLY PICK-UP IN THE WORLD WITH A REMOVABLE ROOF, DOORS, AND WINDSCREEN.

Still, as far as unveilings go, this one didn’t exactly shatter any preconceptions. The Gladiator does clearly look like a Wrangler, albeit with the not-to-subtle difference of a 1.5-metre flatbed extension over the back. And as such, it won’t come as any surprise to be told that it’s based on the Wrangler’s body-on-frame chassis. However, for the record, the frame was lengthened by 78cm to accommodate the flatbed, and its wheelbase is also 49cm longer. But taking bits from the formidable new Wrangler is certainly no crime, especially when that makes this the only pick-up in the world with a removable roof, doors, and windscreen. Cue, an appropriate quote from Gladiator, the movie: “Are you not entertained?!” 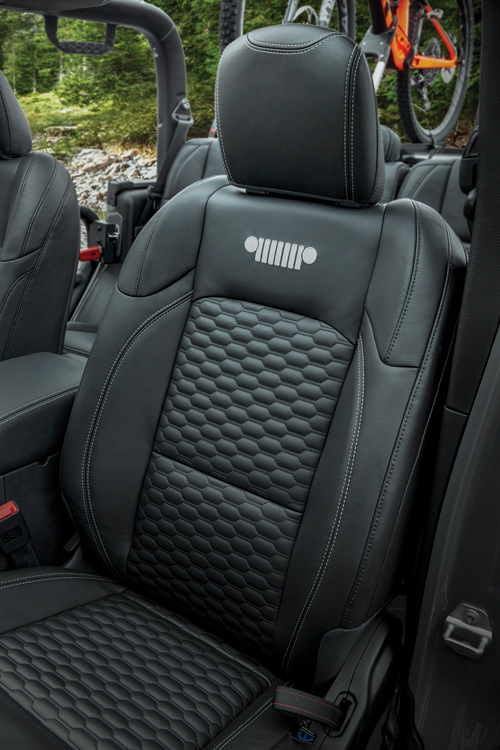 “I’ve never worked on a product before that had so much consumer groundswell support,” Mark Allen, the Jeep design boss, told us before pointing out a few of its well considered design features, including the box’s low sides (that make it easier to reach inside and grab what you need), the damped tailgate (which lowers slowly and can be stopped in three different positions), and the flatbed’s tonneau cover (which rolls up incrementally so you can store oversized objects without the need to tie it down).

The 2,110 kg Gladiator comes in four main trims: the Sport, Sport S, Overland and the Rubicon, the last of which raises the cost to almost 60,000 USD but is undoubtedly the one you’ll want. All come with four doors, four-wheel-drive, full-time torque management, electric front- and rear-axle locks, a slippy diff, electronic sway-bar disconnect and 282cm of ground clearance. And they can all certainly pull. In fact, the Gladiator can tow up to 3,470 kg and accommodate as much as 725 kg of payload. In real terms, that equates to just over two adventure motorcycles on the flatbed, in addition to a 25-foot boat and its trailer hooked onto the back.

Power comes from a 3.6-litre V6 engine that delivers up to 285 horsepower and 385 Nm of torque, and although we doubt the 3.0-litre diesel will ever make it over to our region, we do hope that the choice of a six-speed manual or an eight-speed automatic transmission does.

The interior is pretty much a standard Wrangler five-seat arrangement. The only real difference is that the Gladiator’s backseat folds down (for access to some rear lockable storage compartments in the cabin’s rear wall) and up in a stadium-style manner (to expose open bins in the cabin’s floor). Notably, the seats are lockable, so your possessions stay safe even if you’ve removed the doors, and the floor bins can also be optioned with locks if you should so wish. Speaking of options, Kim Mathers, the head of Mopar, FCA’s in-house customisation unit, told us that,“Wrangler customers spend on average 1,000 USD per vehicle and that makes it the most after-market accessorised vehicle in the Jeep line-up.” However, given the added capabilities of the Gladiator, and therefore the myriad of ways in which people will use it, we wouldn’t be surprised to see it wrestle the customisation crown away from its sibling. That is after all what this car is all about: having a truck load of fun. 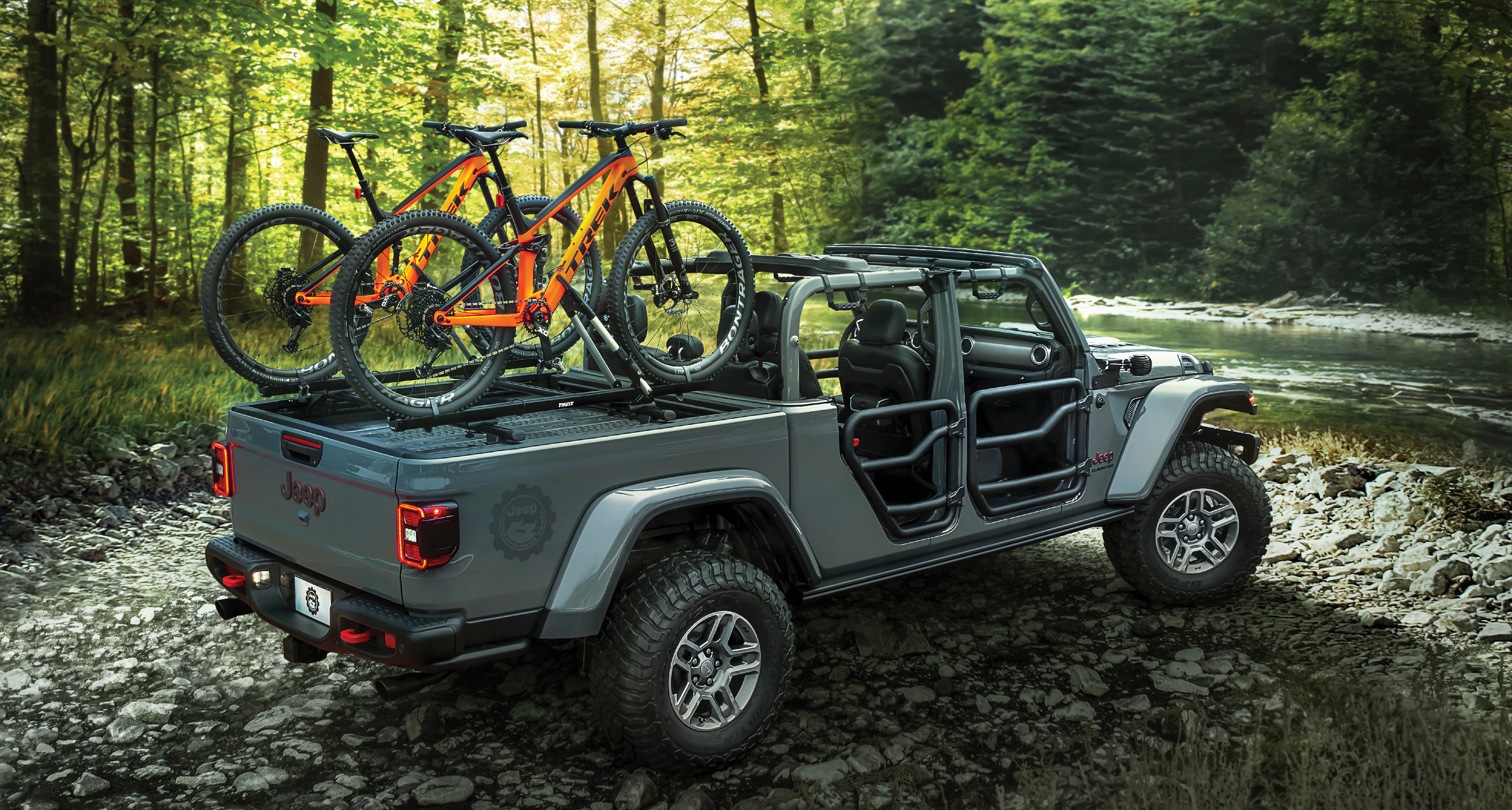