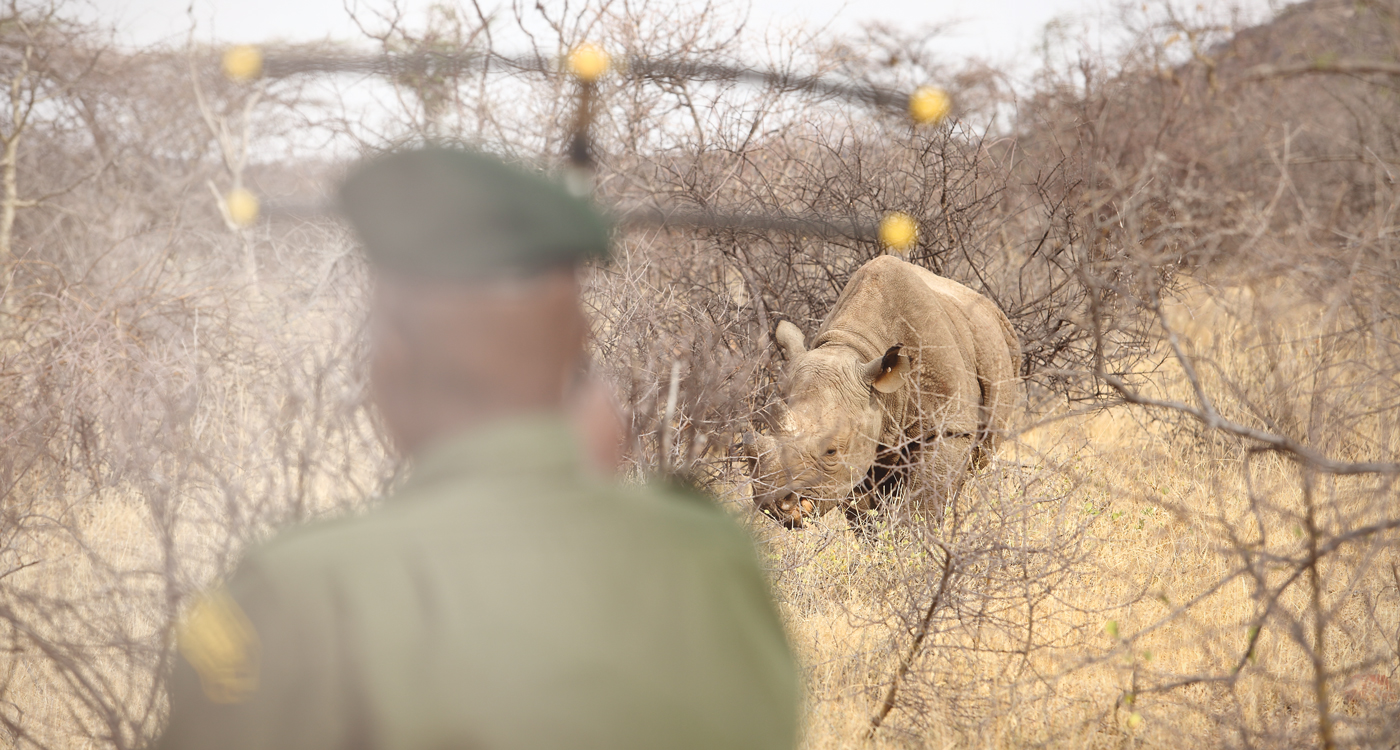 A Walking Safari with Kenya's Endangered Black Rhinos is Leisurely as Long as You Don’t Let Them Track You First
July 4, 2017 Danae Mercer 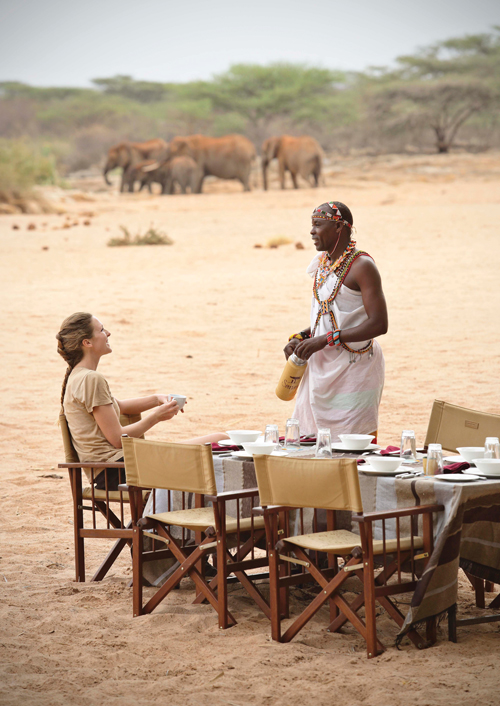 If you want to get up close and personal with some of the mere 5,000 remaining black rhinos in Africa – one of the world’s most critically endangered species – then there’s no better place than Kenya’s fenced-off 54,000-hectare Saruni sanctuary. Once there, you’ll need three things: an off-road vehicle to help you get around this park, which is five times larger than Paris; a GPS locator that picks up the signals of the microchips placed in the protected rhino’s horns; and a sock filled with ash for knowing the direction in which the breeze is blowing. Plus, while we’re at it, you’d best not forget the golden rule of tracking rhinos: always stay down wind.

“They have very sensitive noses and ears,” whispers Sammy Lemiruni, our guide at Saruni. We’ve left the vehicle and are tiptoeing through the bush alongside two Sera Community Conservancy rangers. He informs me that should the megafauna detect us, they’ll either run away or charge at us, so it’s essential we remain as stealth as possible. At the very least, I tell myself, it’s comforting to know they’re herbivores.

After 15 minutes, Lemiruni raises his hand in a gesture that means ‘stop and be quiet’. He’s spotted a rhino, huffing and puffing his way through a foraging spree in the acacia trees. The distance between us is negligible, the tension is palpable; my heart is beating, pulse racing, while the feeling of curiosity and excitement are intensifying within.
Saruni, which opened in February this year, has been conceived in partnership with Sera Community Conservancy, meaning the ethical protection of rhinos is tantamount to their very existence. Every day, around 200 staff roam out across the vast, fenced-in domain, ensuring the animals’ welfare. Eleven rhinos live here, relocated from nearby areas in a move that has allowed them to return to their natural habitat at last. To help fund the project, a portion of every guest’s booking goes directly to the conservation. 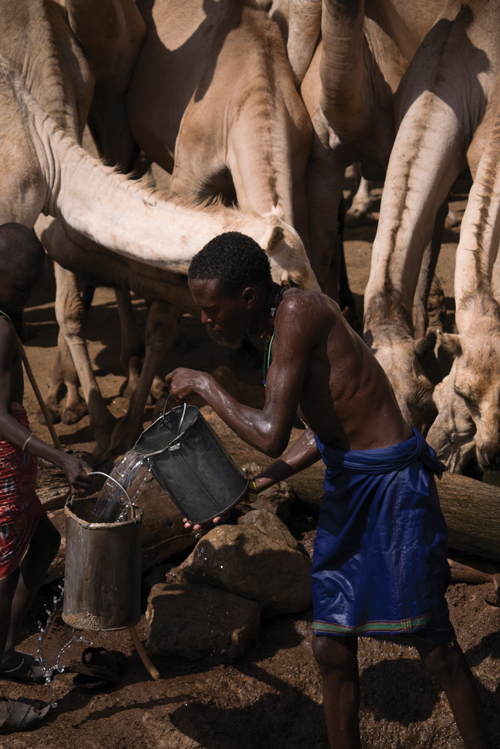 “Like other African countries, Kenya suffered from a surge of poaching in the last four years,” explains Riccardo Orizio, CEO and Founder of Saruni, who hopes the new project can help save these beautiful animals from extinction. “You know this is the first time in 30 years that the black rhino has returned to North Kenya,” he adds.

Under an hour’s drive from the Conservancy is the Saruni Rhino, an intimate camp, where we are based. It consists of just two small thatched-roof ‘bandas’ (mostly open-walled, stone cottages) with waterhole views, that are nestled under swaying doum palms. The camp only sleeps four to six guests at a time but it does so in style with a king-sized bed in each cottage, a sandy veranda on which you’ll find a couple of director’s chairs and tables, as well as some hanging hammocks – or rather suspended beds – in the trees. Meals are either served in the dedicated mess hall or on a dry riverbed, which is the perfect location for a stunning torch-lit bush dinner under the vast African skies.

The location was strategically chosen as it’s got perfect views of the nearby waterhole, a popular stop-off point for a diverse range of wildlife: elephant, impala, birdlife, hyena, oryx, and Grevy’s zebra. We happen upon many dik-diks and long-necked antelope, and on our first evening we’re greeted by the sight of an elephant mother and her calf. On the second night, the area’s many monkeys started frenetically jumping about and screeching in the trees, which Lemiruni explained was a sign that a leopard is close by.

Days at Saruni are structured around the nocturnal rhythm of the rhino. Guests can go out on tracking missions at 5am and 5pm and in between you can take a trip to the nearby Reteti Elephant Sanctuary, which provides protection for orphaned and abandoned elephant calves, as well as one baby rhino. It also happens to be a great place to do a long guided safari walk along the riverbed.
While Saruni’s camp is tiny, it maintains a number of luxury trappings: complimentary drinks and snacks are available anytime upon request; meals are exquisite, served under the stars and the light of flickering lanterns; and the staff are well-trained, discreet and polite. There may not be wifi or TV, but there’s serenity, nature and peace, which is much harder to come by these days.

There’s also the opportunity to learn more about the local Samburu people. Related to the Masai, they are semi-nomadic cattle-farmers whose colourful traditions have often been portrayed in Hollywood films (and even in one infamous 1989 Nike commercial). Lemiruni is a member of the local warrior tribe and ever present at Saruni. At camp, he wears vibrant robes of orange and red. When tracking rhinos however, he switches to neutral tones, as rhinos are especially sensitive to red and white. His beaded bracelets, made by his sister, stay on.

“I call this paradise,” smiles Lemiruni one evening over sunset cocktails. That day, we followed a rhino for over 10 minutes, trailing and watching from a distance. He says it was one of the best approaches he’s ever had. “Here, you sit and listen,” he reflects, “there’s only the sound of leaves and you hear nothing else.”