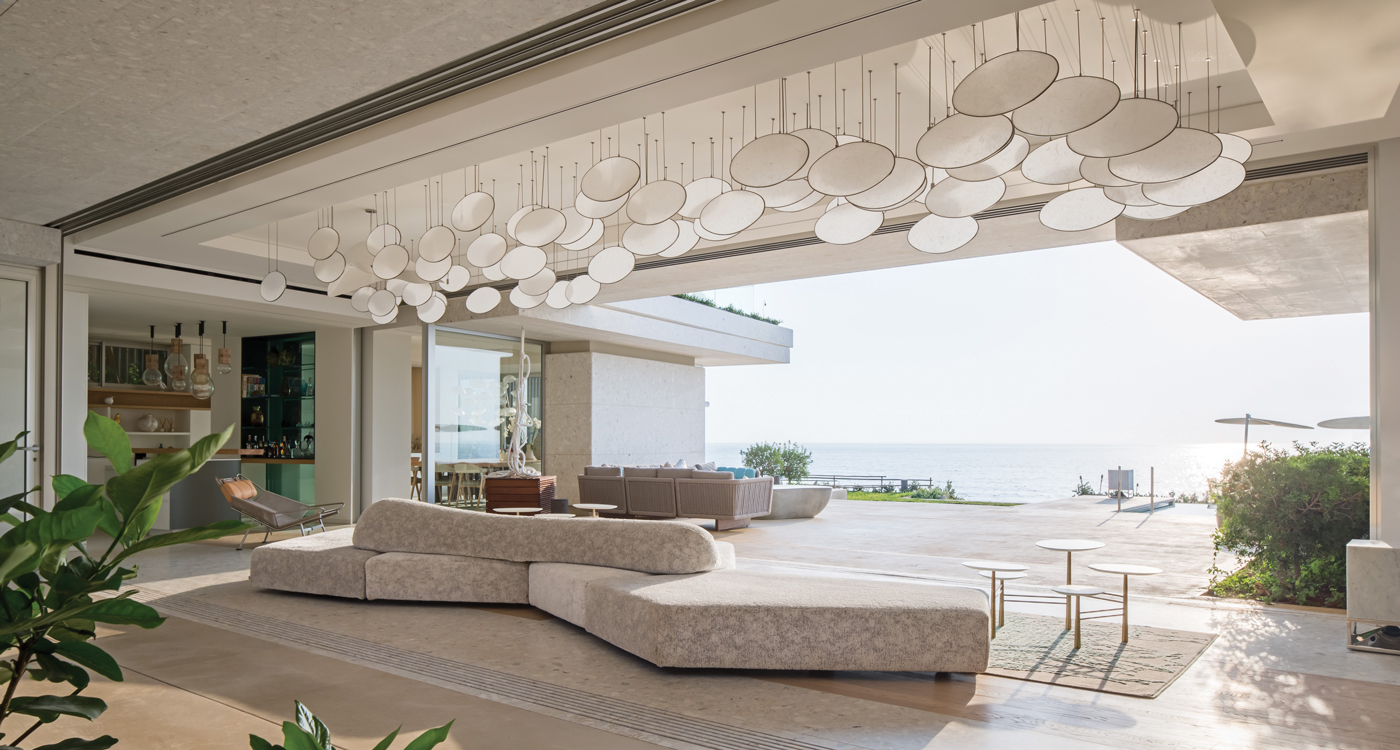 This Villa by Blankpage is an Architectural Wonder Floating Above the Mediterranean
June 3, 2017 Marwan Naaman 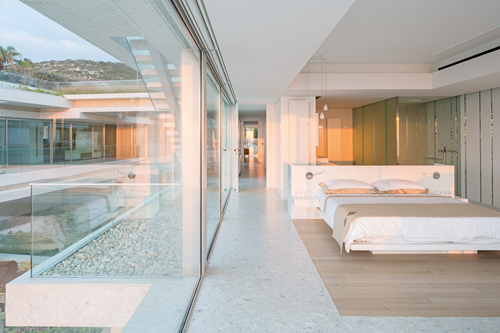 Not all houses were created equal. In the pretty town of Monsef, on a particularly scenic stretch of Mediterranean coastline a few minutes’ drive north of Byblos, Villa Kali attests to that adage.

Completed just last year, and often referred to as the El Khalil Beach House (after the family who owns it), Villa Kali comes courtesy of Blankpage Architects (Patrick Mezher and Walid Ghantous’ firm) and Karim Nader who left in June 2016, to form his own studio. Together, the three men envisioned a four-story seaside home that would at once be open to the spectacular beauty of the Mediterranean, while providing stylish shelter from its elements – brutal sun in summer, rainstorms in winter and strong winds in springtime.

Prior to building their home, Faisal and May El Khalil bought the seafront parcel of land with the idea to create a contemporary hotel particulier for the entire family – including their children and grandchildren. To accommodate the extended family, the architects created four distinct living quarters, on the second and third levels, all joined together by a vast common space at the lower level. The fourth level is an open-air rooftop terrace.

“We created two separate volumes that open up toward the sea,” says Karim Nader. “They’re not parallel to each other but form a V shape.” On the one hand, the V shape reflects the actual layout of the land, yet it also serves a second purpose. “It allowed us to open up the perspective of the home to the horizon,” says Nader, adding that the singular V shape was essential to achieve ravishing sea views from virtually anywhere in the house.

When you enter Villa Kali from the Monsef beach road, you don’t immediately see the water. You have to turn 90 degrees, past the aqua-blue-tiled cascading fountains, and suddenly you have an unobstructed view of the Mediterranean. The living quarters are on either side of the double-volume home, and you have to go down an outdoor flight of stairs, with fountains on either side, to reach the central courtyard. “It’s a Japanese process of space arrangement,” says Nader. “The water element leads to the sea via falling cascades.”

The communal central courtyard, inspired by those found in traditional Lebanese homes yet updated to reflect contemporary mores, is one of the most unusual features of the beach house. “The family wanted a place to receive people,” says Nader, pointing to the various features that constitute the space: a dining room and bar on one side, and then a TV room on the other. In the centre of it all, there’s a living room that’s roofed-in but open to the garden and the sea on one side, and to the staircase with its running fountains on the other. Beyond the living room, the architects created a garden with a pool, an exterior bar and even a cooking area, all on the edge of the sea, allowing the homeowners maximum usage of the outdoors. And with the Mediterranean right along the edge of the garden, at the residents’ fingertips, the sea is literally in the home’s backyard. 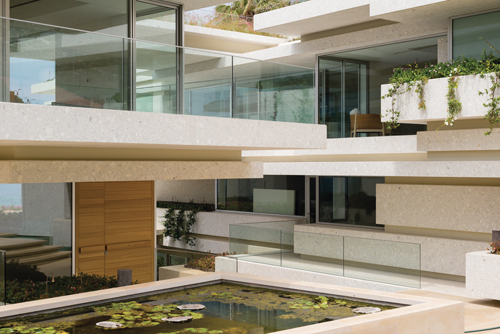 While the central living room is an open-air space, it can also be closed off during winter thanks to sliding glass doors. These doors, which are invisible when open, ensure that the living area is protected from storms or cold weather, while enabling full usage of the space during the colder months. “If there’s a storm, you can enjoy it as you would a painting,” says Nader. “The idea is to create maximum transparency to frame the view,” adding that the living room also has floor heating for total comfort.

The pool, which lies in the garden between the house and the sea, is the last layer of the manmade water features, according to Nader. While the pool shows clean lines and purity in its design, the rock formations in the sea are wilder, more baroque, jagged and rough in their natural forms. “These rocks in the sea inspired the construction of the house,” says Nader, drawing parallels between the strata of the sea rocks and the way the various layers of the house were designed. “The architecture gives a sense of flotation,” he adds. “There are no columns, and nothing is supported. The house is as light as possible.”

In addition, the stunningly beautiful terrazzo stone with marble aggregates cladding the house’s exterior (and also used for the interior floor) draws its inspiration from the Mediterranean. “The stone is reminiscent of the sea pebbles in its colour, texture and shape,” says Nader.

In terms of furniture, the living area boasts an interesting mix of pieces: there’s a custom-designed dining table made of cedar wood, rugs by Iwan Maktabi, a sofa by Edra, and tables by Nada Debs and Karen Chekerdjian. Many home accessories – the light fixtures, the chandeliers and more – were designed by Blankpage and Karim Nader Studio.

There are also two wine coolers, the first of which is near the bar in the living area. “The cooler is custom-designed,” says Nader, “ with slate rock in its background. The bottles are placed on brass rods.” The second wine cooler is in the sprawling industrial kitchen in the back – this is the main kitchen for the house, complete with a service entrance, although there are smaller kitchenettes in each living quarter on the upper floors. Also in back, the architects have included a gym, sauna and Jacuzzi.

While there are two separate volumes to the home, they are connected, as stated before, via the central courtyard on the lower level. The two volumes are also connected via two exterior walkways, one of which joins the rooftop terraces, and the other of which bridges the bedroom level. The one that connects the bedrooms features a communal dining room table that’s ideal for alfresco breakfast with a spectacular view of the Mediterranean. “The rooftop serves as an external living room,” Nader adds.

The second and third levels include the bedrooms (there are five bedrooms on each side of the house), dressing areas (essentially walk-in closets), the bathrooms, sitting areas between the bedrooms and the aforementioned kitchenettes. “The indentation of the house allows direct views of the sea,” says Nader. “Even the back bedrooms and some bathrooms have sea views.”

Villa Kali, a project that was many years in the making, also offers luxury features like exquisite landscaping integrated around the project, a sound system throughout the property and a particularly graceful outdoor circular seating area that fronts the sea – a true design gem. But the architects’ greatest achievement is perhaps the ability to balance their customers’ lifestyle needs with architectural details that elevate Villa Kali from what could have been a simple beach house to a new Mediterranean landmark – a house whose design will one day reflect a specific era’s most important architectural values.