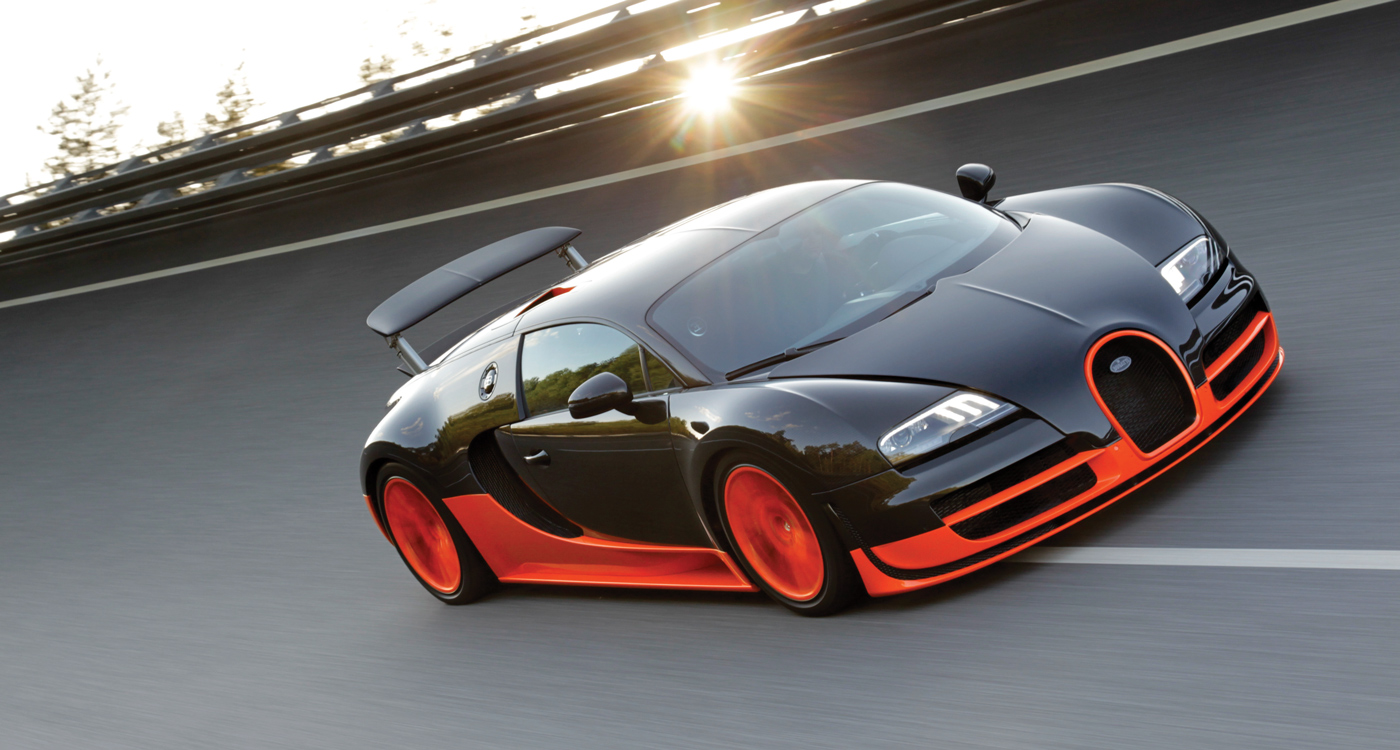 The Fastest Car in the World is the New Bugatti Veyron and it's Glorious Insanity
October 28, 2010 Kevin Hackett

The end-of-the-line Bugatti Veyron Super Sport is the perfect send-off for a legendary car. Five years after it started production, it regains its crown as the fastest production car in the world, while receiving a new accolade: Bespoke’s Ultimate Vehicle Award.

In the 21st century, being quick is all-important. Everything is instant – from the speed a page loads on the Internet to taking and printing a photograph or seeing events unravel on international news channels, human beings have a seemingly insatiable appetite for anything fast. And in a world of speed, road cars do not come any faster than this one. It’s official. 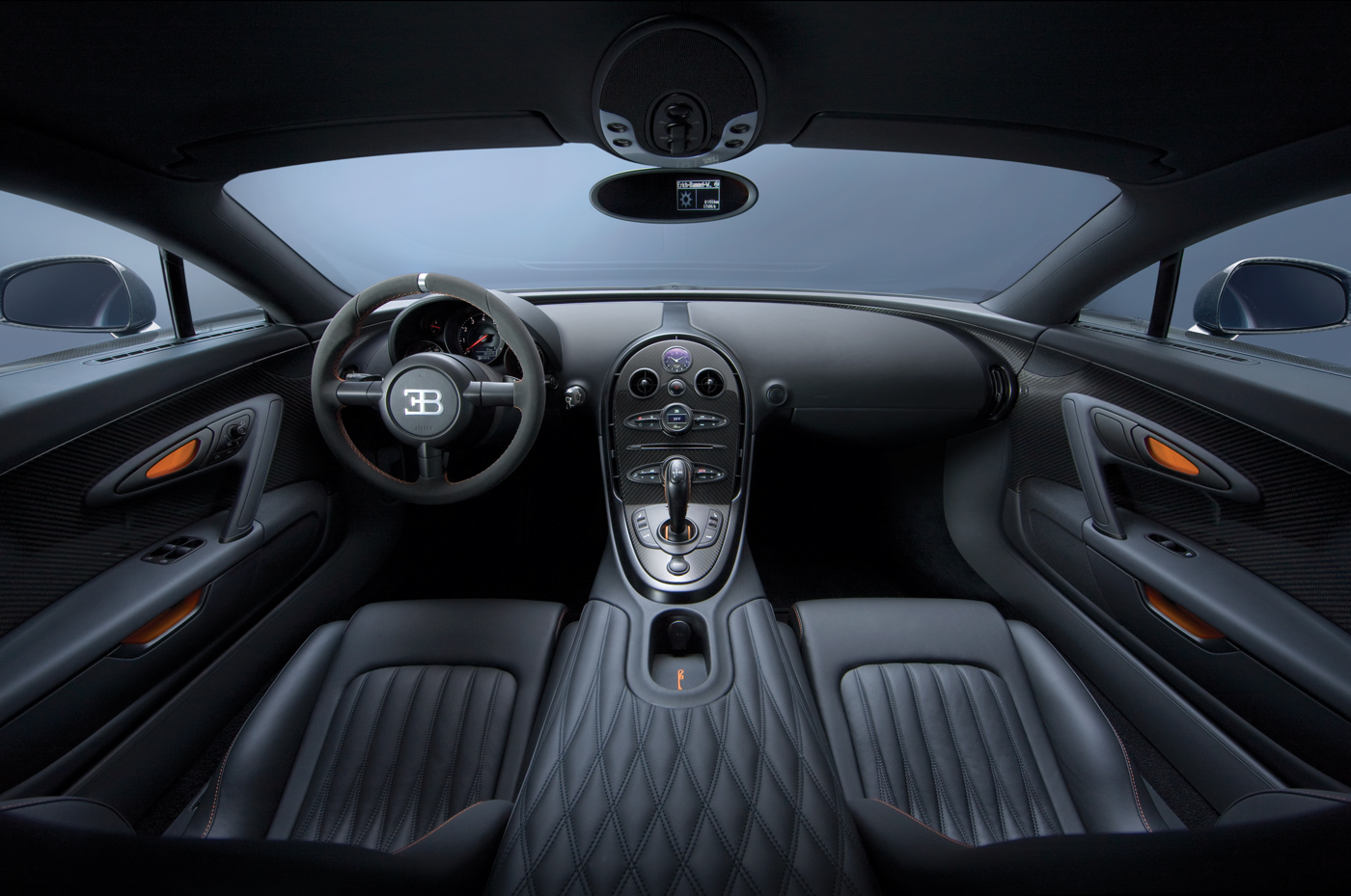 That great leveller, the Guinness Book of World Records, has verified that the newest, greatest Bugatti Veyron, the Super Sport, is the fastest production car on the planet. On June 26th 2010 – a clear, bright and warm Saturday at Volkswagen’s top secret test facility at Ehra-Lessien in Germany – French Le Mans driver Pierre-Henri Raphanel stormed into the history books by setting an independently verified world speed record of 431km/h (or 268 mph for those who prefer miles).

“The Super Sport wasn’t developed to set any world records,” Bugatti’s head of tradition, Julius Kruta tells me. “It was simply the icing on the cake and the best possible stamp of approval on what we’ve done to develop the Veyron.” He explains that a significant number of Veyron owners had approached the factory about making the car more raw, more focussed, even more powerful. Rather than let some tasteless aftermarket tuning company bastardise what they’d spent years developing, they decided to give those customers exactly what they’d been asking for.

My own introduction to the Super Sport is not at Ehra-Lessien. Rather it’s the wilds of Andalusia in southern Spain, where there are plenty of roads bereft of traffic and, thanks to billions in European Union funding, they’re mostly in perfect condition despite the often incendiary temperatures.

There have been special editions of the Veyron in the past, of course, but these have been mere cosmetic exercises, such as the Hermès cars and last year’s Grand Sport, which was basically a standard Veyron with a removable roof section. The Super Sport is an altogether different animal however, with a significant amount of re-engineering under its carbon fibre body.

What has always made the Veyron so extraordinary is the fact that it’s as easy to drive as a Honda Civic, no matter what speed you’re doing. Docile yet mental, civilised yet brutally fast, no other car in history has brought prodigious power together with beautifully crafted luxury like the Veyron. It’s so finely balanced that messing about with any aspect of its design would be tantamount to physical violation. So, has Bugatti succeeded in making this hallowed vehicle even better, or has the desire for a more raw experience behind the wheel sullied what made it so great in the first place?

Only one way to find out and, lucky me, I’m one of just 30 journalists worldwide to get a day behind the wheel. I should point out at this stage that the car used to set the world record, while identical to the one I’m driving, had its electronic limiter removed and the production cars are restricted to (a still ludicrous) 415km/h. This is simply because even the mighty Michelin cannot yet produce a road tyre that’s capable of maintaining a higher speed while still offering all-round usability. This, then, is as extreme as road cars get in 2010. 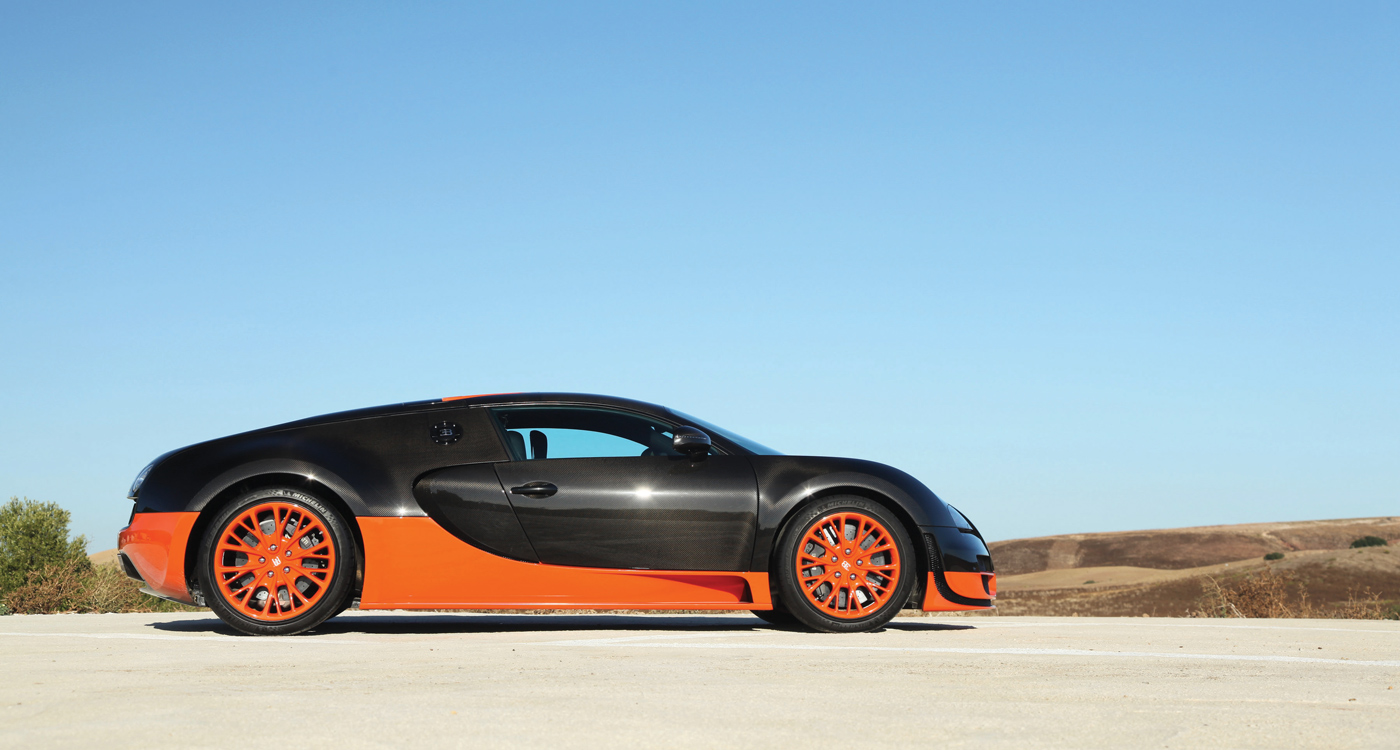 Externally, the Super Sport differs from the, I shudder to say, ‘standard’ Veyron by doing away with the two huge air ducts that sat atop the rear buttresses. In their place are twin NACA ducts situated in the rear of the roof, giving not only superior engine cooling but a cleaner, less fussy profile. The wheels are new, with every spoke doing its job of forcing more air into the brakes. In fact, having an engine that now produces power to the tune of 1,200bhp and torque of 1,500Nm (that’s an increase of 20 per cent), cooling is more important than ever, so there’s a revised front end that allows more air to flow through the radiators, which themselves have been redesigned.

This is an extensively re-engineered car. There’s a new exhaust system, a new double diffuser at the rear, the engine itself has enlarged turbochargers and intercoolers, the carbon ceramic brakes have been upgraded, the transmission has been reworked and has new software, the suspension is stiffer – in fact I could go on and on about all the various tweaks and improvements but I’m sure you’ll agree that it’s far better to see how everything translates into the experience that 40 or so of the world’s wealthiest people will get to experience every time they open the taps of their Super Sports.

The ignition is still operated via a traditional key – remember those? Press the big starter button in front of the gear shifter and the Super Sport literally thunders into life. No Veyron ever sounded this angry before. It’s a deep, guttural bellow that sends the wildlife scurrying for cover and alerts anyone within a mile radius that you’ve just started the world’s fastest, most expensive production car. The local police no doubt can hear it, too.

Knock the stick over to the right and engage Drive. From there on you’re best using the exquisitely engineered paddle shifters so you can keep both hands on the wheel at all times. You’ll probably live longer that way. Unlike some other very fast cars, the Veyron is a pussycat at low speeds. The transmission, if left in automatic mode, seamlessly shifts between ratios, keeping everything calm and civilised. But I’m desperate to get to the wide, open Spanish highways so I can feel just what this masterpiece is capable of. 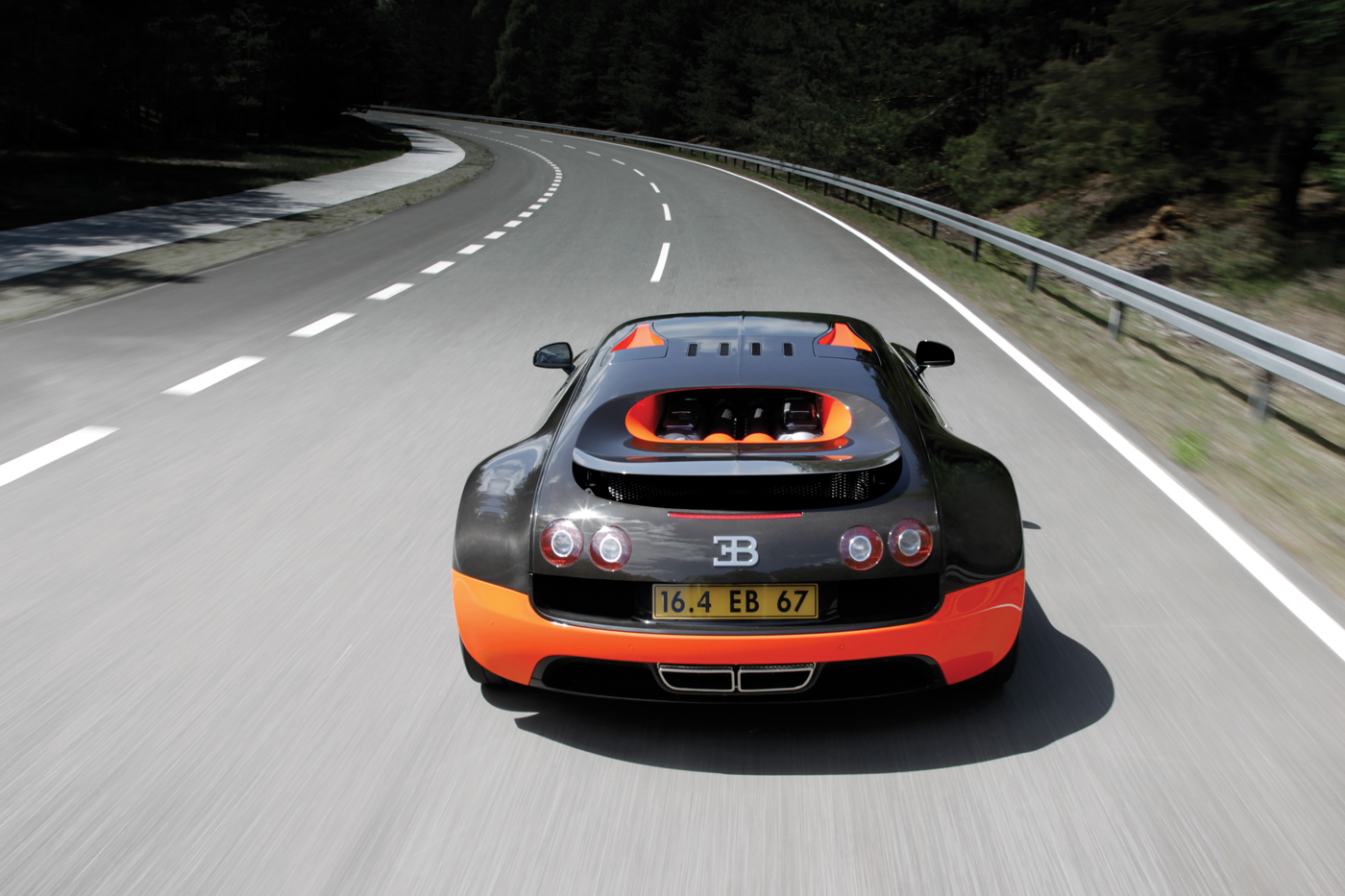 Soon enough I get my wish. The road is completely deserted and I can see for miles. No traffic, no police, just lots and lots of straight, perfect blacktop. So I swallow hard and knock down into third. I floor the throttle and the Super Sport roars, sounding as though Armageddon has started just centimetres behind my head. I can hear cooling air rushing over me and into those ducts as the car destroys the road. My body feels compressed, such is the ferocity of the acceleration. Into fourth, then fifth as the assault relentlessly continues. As I select sixth I quickly glance at the digital speedo and see it registering 324km/h – a personal best.

I back off the power and hit the brakes hard; my body coursing with adrenaline. As the big stoppers bite, I feel everything inside my skeletal frame seeking a way out through my chest and a second or two later the Super Sport is at a legal speed once again. This entire exercise is over almost as soon as it began – like a white-knuckle fairground ride. Yet, as impressive as the sheer speed is, what hits me between the eyes is that the Veyron remains totally, utterly composed. No lift, no stray, it just stays true to the course its driver inputs. It’s mind-bending stuff. Yes, being four-wheel drive and weighing 1,838 kg, it does understeer when you press hard through the twisty bits but, honestly, would you want the back end breaking traction when there’s so much power being put down? Me neither.

In the case of this Super Sport, Bugatti has achieved the impossible and made the Veyron even better. It is indeed more raw, more exciting, even faster and even more focussed, yet it’s still civilised and comfortable. It shrinks around its driver, despite being two metres wide and makes you feel part of the driving process, which in itself is rare for a car these days. The Veyron Super Sport is, all things considered, the ultimate version of the ultimate car and we may not see the likes of it again. A towering achievement.