People | Fashion | Despite Becoming the First Arab Designer to Collaborate with H&M, Sandra Mansour’s Story is One of Resilience 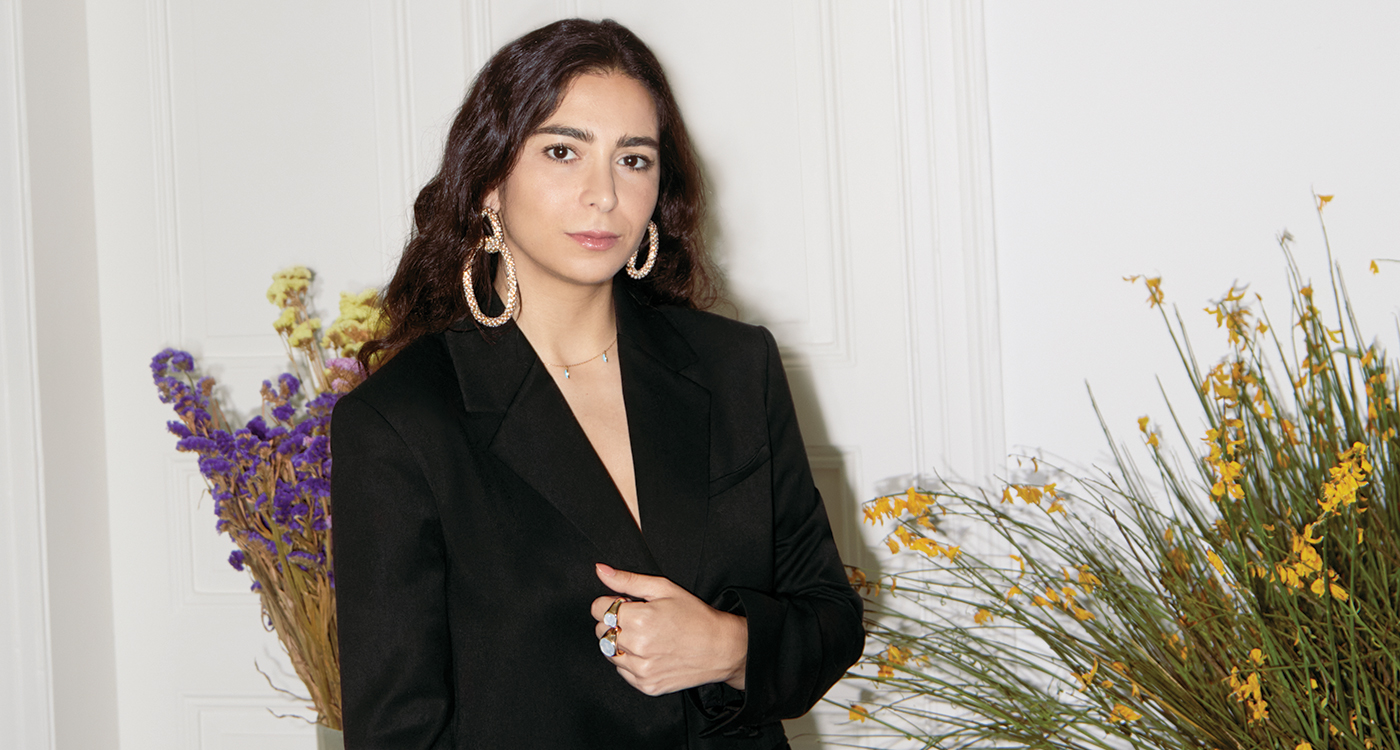 Despite Becoming the First Arab Designer to Collaborate with H&M, Sandra Mansour's Story is One of Resilience
April 29, 2021 Rayane Abou Jaoude 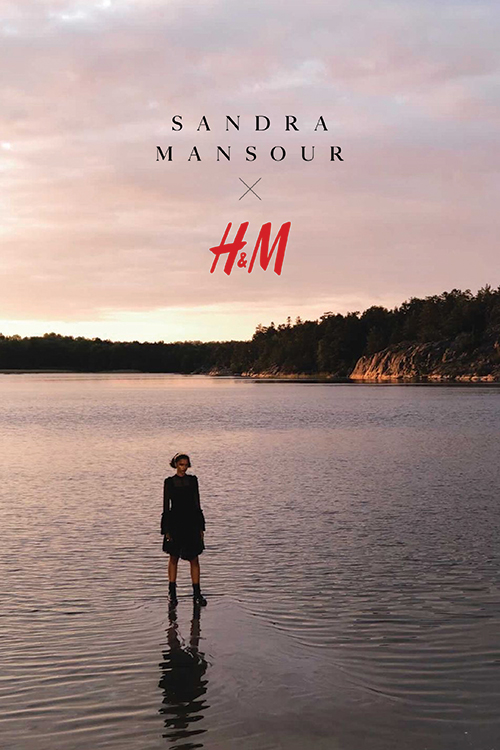 By working with H&M, she joined the ranks of Stella McCartney, Lanvin, Sonia Rykiel and Versace.

The Swiss-born Lebanese designer Sandra Mansour says she had aspired to become an artist long before she ever made the shift to fashion. And you can see as much in her work, which carries dreamy, romantic elements, as well as characterful prints that betray her passion for painting. Yet, in stark contrast to many of her more high-profile Lebanese peers, she chose to eschew the world of couture in order to specialise in ready-to-wear clothes that you can mix and match and wear from day to night.

“I started off as a painter,” says the 37-year-old in our second interview in four years. “ I never really thought I would end up as a fashion designer but then I found my calling while interning at Elie Saab, and that proved to be a great platform that enhanced and nourished my interest in designing and creating pieces for women to wear.”

In 2010, following that internship, Mansour decided to move to Lebanon and set up her own brand and atelier. Since then, she’s showcased her work at Paris Fashion Week, and dressed celebrities like Gigi Hadid and Zoë Pastelle.

Recognised for her intricate ready-to-wear line yet also sought after for her ultra-romantic bespoke bridalwear, Mansour’s clothes are composed of delicate fabrics and couture-like detailing. She manages to find harmony in opposing forces with collections that are at once pretty and powerful, but also feminine and daring, with many dresses featuring beautiful beading or sequins-work, as well as fantastical stories laced into their silhouettes. When we ask her to elaborate on where she derives these narratives, she says they’re simply expressions of various times in her life.

“My collections are emotions that are brought to life because of art, they allow me to dream and to narrate. While I dream, I can create,” she explains. “For instance, our 2021-22 autumn/winter collection, ‘Au Bout du Labyrinthe’ is an ode to surrealism and the surrealist artist Rita Kernn-Larsen. It’s a collection woven into dreams, where each piece expresses unique illusions such as embroideries that crawl like ants, one over the other, whimsical lines on a crepe-backed satin dress that hugs the body, golden earrings that burst into tears, and hand-knitted ensembles adorned with anamorphic golden buttons we created in house. It’s an imaginative collection that can be open to interpretation.” 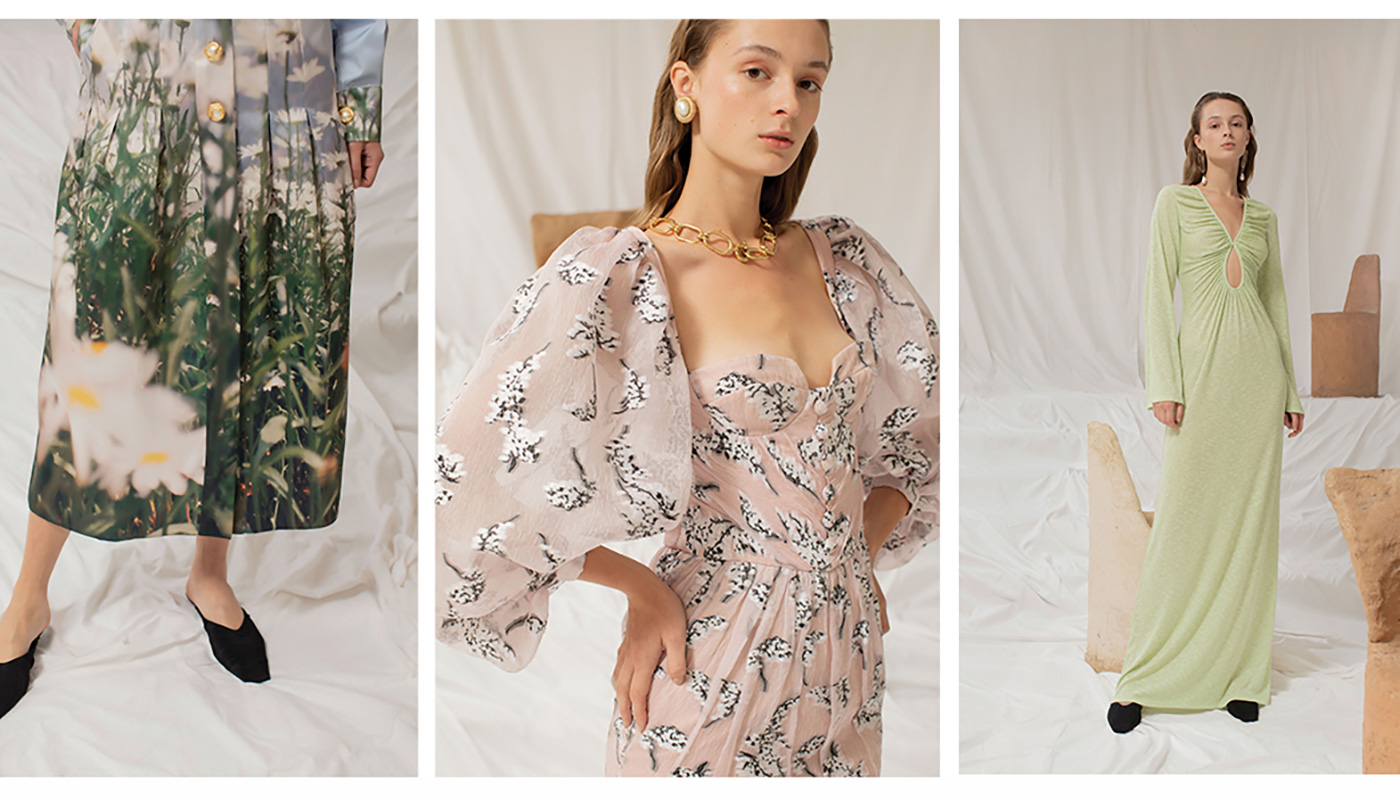 According to Mansour, the spring-summer 2021 ‘Dans Mon Jardin’ ready-to-wear collection is inspired by the Gardens of Chatine in Lebanon and “those last moments of airiness and laced with the feel of a garden that was touched by early morning dew.”

With a style that’s ethereal, simple, strong and chic, her brand took a big step towards becoming a more world-renowned name last summer when the Swedish retail giant H&M chose her as their first ever Arab collaborator. 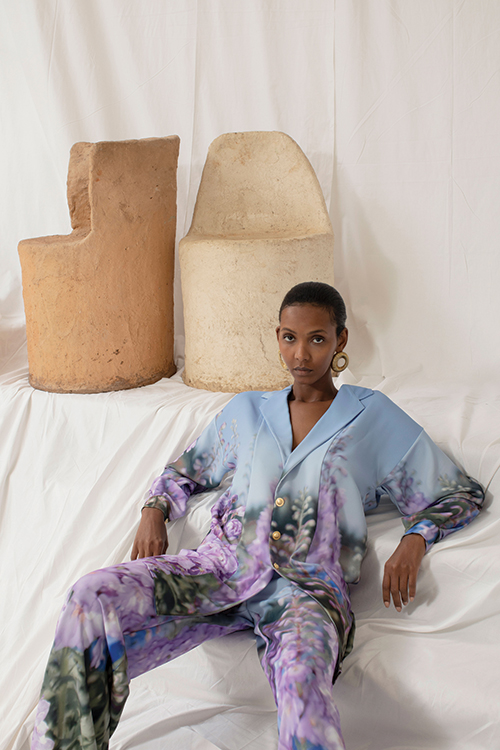 “I was away for my birthday weekend, and I got an email and one thing led to another,” Mansour says of the life-changing capsule collection that had been scheduled to drop on August 6th but got pushed back to August 27th following the August 4th Beirut Port explosion, which caused over 200 deaths, 15 billion USD in property damage, and decimated a large part of the capital, including her atelier, showroom and home (situated above the atelier). H&M even pledged 100,000 USD to the Lebanese Red Cross in solidarity. Remarkably, in spite of the tragedy and the devastation, Mansour has chosen to remain in Beirut and rebuild her atelier in an immense display of resolution and hope.

“The Lebanese people, I can’t tell you how many people called me to offer their support, and so many NGOs reached out to help. You know, in the first few days, we couldn’t find plastic to cover the windows and doors to block the dust, so five boys in their 20s came and wrapped my showroom, my atelier, my apartment. These are people I don’t even know – I’ve never met them in my life,” Mansour recounts. “Another wonderful NGO came with engineers and architects to inspect every corner of my building to make sure it wouldn’t fall down. I mean, it’s amazing.”

But, going back to the H&M collaboration, Mansour says all it took was a week of emails going back and forth before she was invited to Sweden. “I came back to Beirut and a week later I was in Stockholm meeting with the H&M team. Then began the wonderful journey of creating the ‘Fleur du Soleil’ collection.”

‘Fleur du Soleil’ boasted a range of both soft and edgy dresses, blouses and ruffled skirts, as well as a blazer, hoodie and t-shirt, in lace, jacquard and embroidered organza. The colour palette comprised a mix of earthy shades of ivory, black and grey, the garments and accessories exuded Mansour’s easy versatility, and true to her style, everything was influenced by both nature and art.

“We really wanted to create pieces that served as an inspiration, referencing the sunflower and a quartet of female artists,” Mansour says. “The sunflower represents hope and light, while all the other elements came to life through the guidance of Toyen, Dorothea Tanning, Léna Leclercq, and Bibi Zogbé – Toyen and Dorothea Tanning are exceptional self-expressionists, their art guides me, Léna Leclercq is a master poet and her words always evoke emotions, while Bibi Zogbé has a romantic and melancholic way of expression.”

Mansour’s collaboration with H&M came at a precarious time, not just in terms of the situation in her home country, but because the fashion industry had been, and continues to be, hit hard by the onset of the Covid-19 pandemic. As a result, many retailers have shifted their focus to online shopping, production has dropped significantly, and consumers and brands alike are questioning the impact of the industry on the environment.

“The shift has already started, the industry is making a radical change in regard to digitalization, ethical and sustainable products,” notes Mansour, whose brand prides itself on its belief in sustainability, “but most important is the change in consumer demand and behaviour that we are witnessing and that’s something we will have to watch out carefully for.”

We draw a close to our interview by pointing out that with so many trying to make it in the industry, it can’t be easy to make a name for oneself, and we ask Mansour if she might have any advice. “There is no standardized playbook, stay true to yourself, trust your intuition. This is the only way to pave the way.” 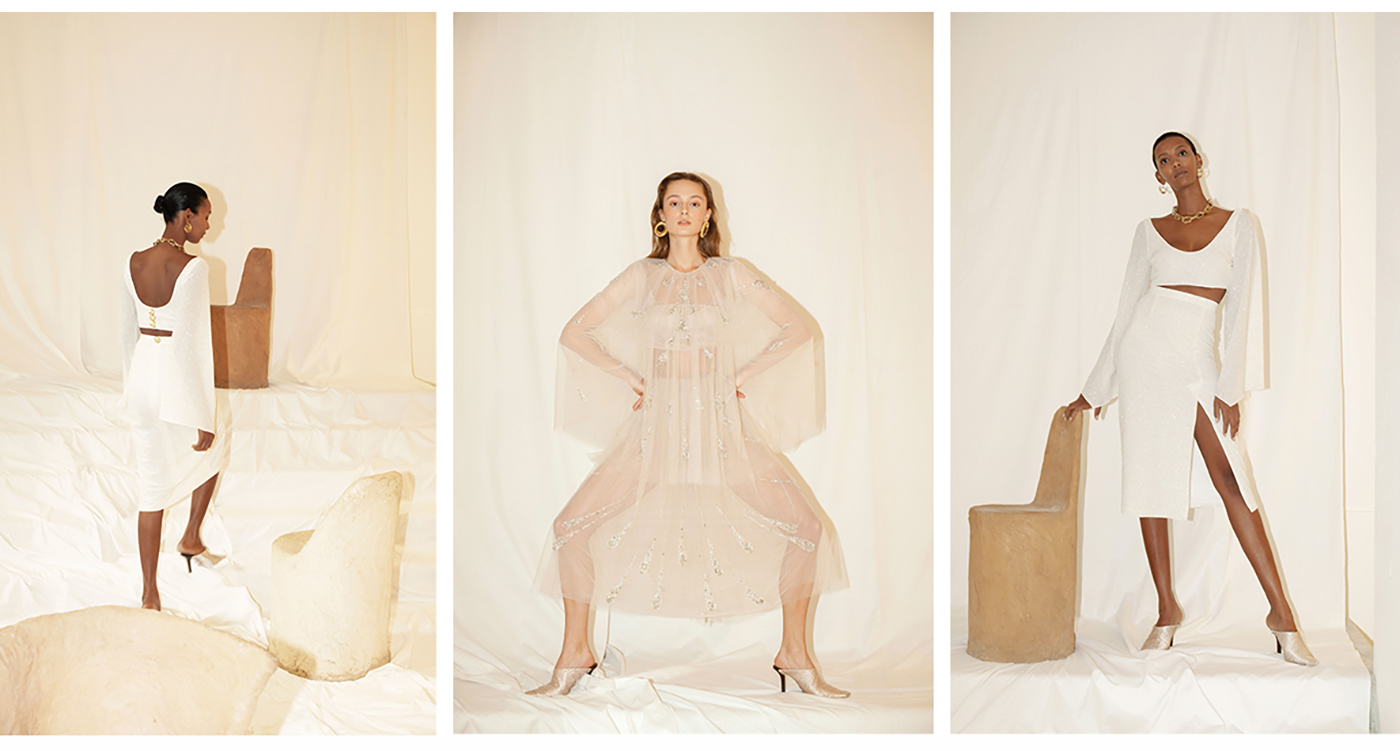 NOTE: Mansour is all too aware of how little help and hope there is for the people of Lebanon these days and she asks that, if you can, you donate to the Lebanese Food Bank, Impact Lebanon, XPatria Emergency Relief Fund for Lebanon, and the Super Fund for Beirut.