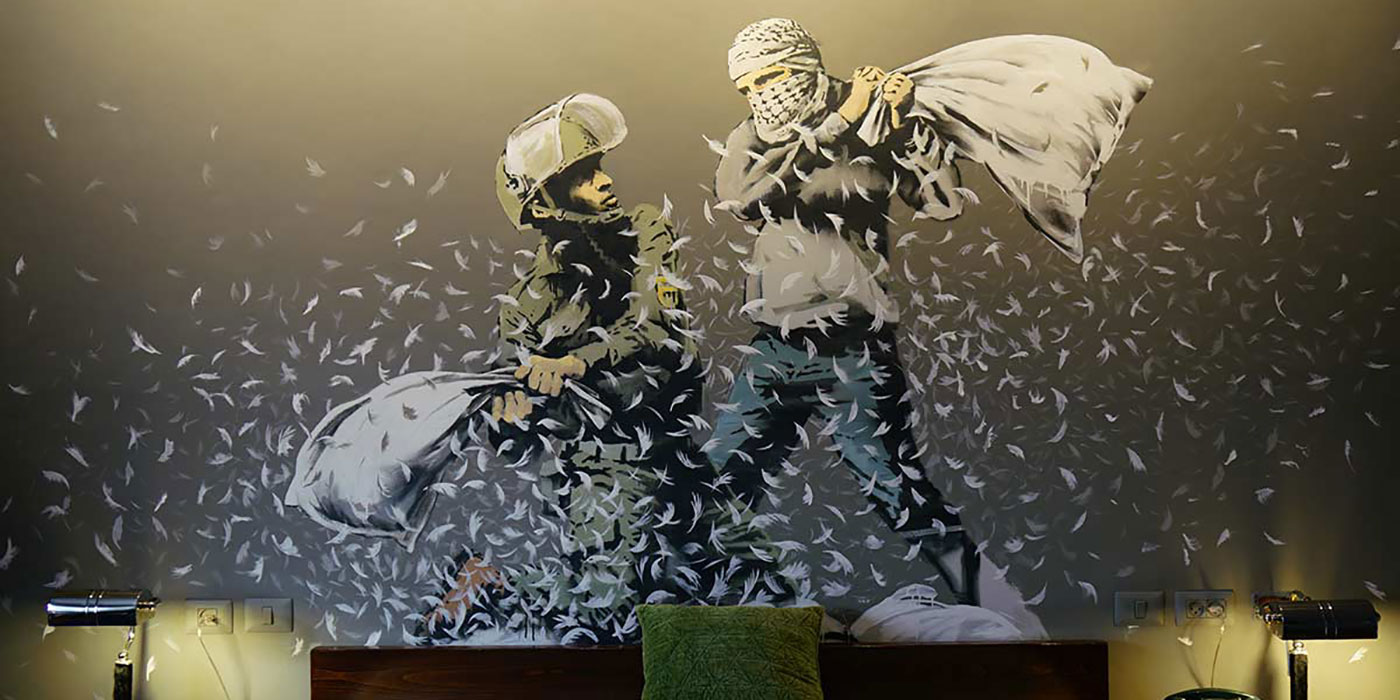 Banksy's Walled Off Hotel in Palestine Literally Has the Worst View in the World
March 11, 2018 Nadia Michel

Say the name quickly and it sounds a lot like the name of a a world-renowned hotel chain. But unlike the luxury American brand it riffs, this one isn’t a part of the Hilton portfolio, it doesn’t have a spa, and breakfast is more likely to include eggs shakshoukeh with a side of non-violent resistance than any champagne or caviar. 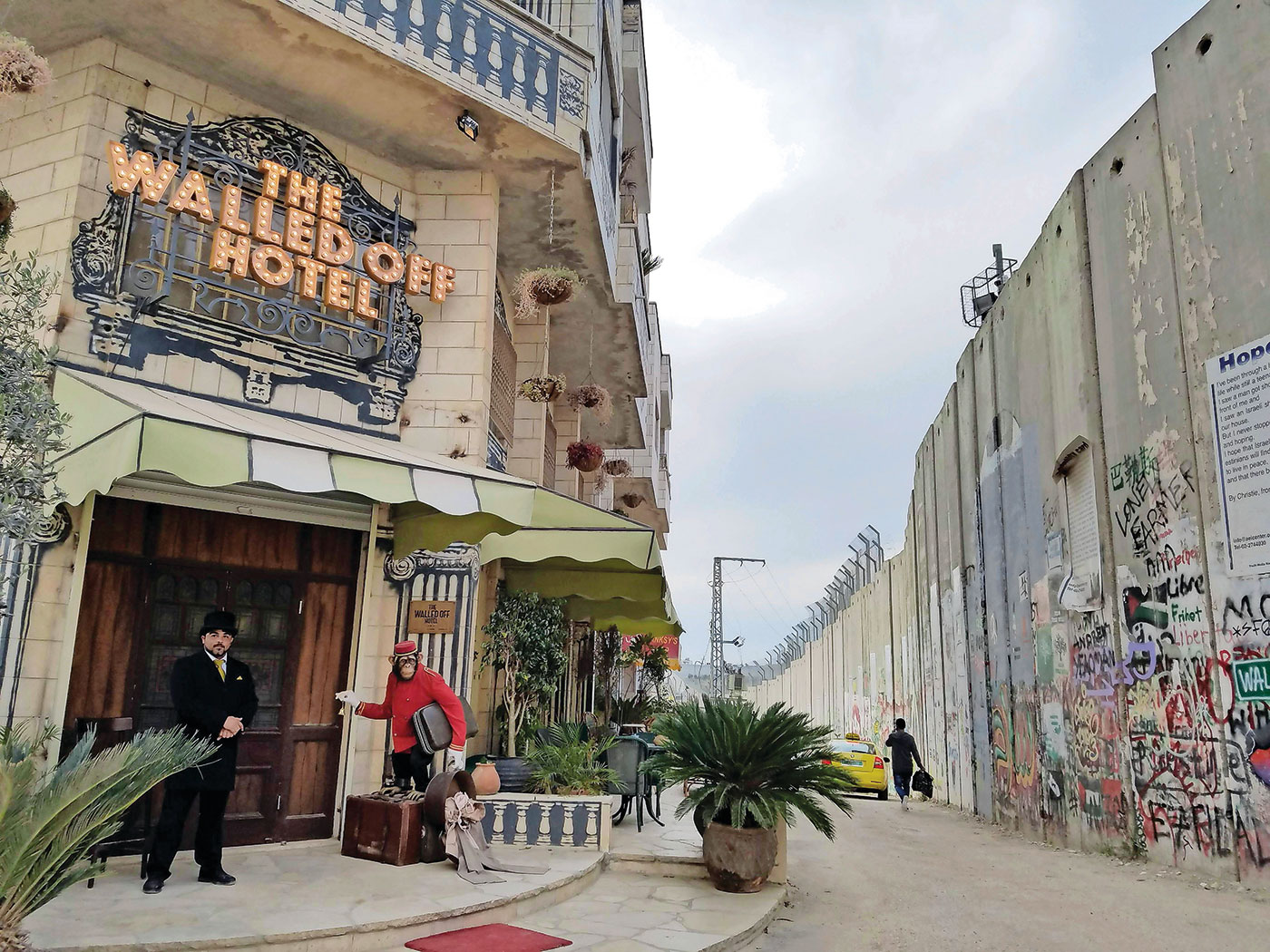 That’s because The Walled Off Hotel is located in Bethlehem, right next to Israel’s infamous West Bank barrier, and countless IDF military towers. “Banksy saw the wall as a giant canvas,” founder and owner Wisam Salsaa says of the sought-after yet still anonymous street artist, who installed a site-specific collection of politically charged art throughout the hotel.
The nine-room guesthouse features experiential accommodations that range from individual military barracks-like bunk beds (60 USD per night) to a Presidential Suite (965 USD per night) that pokes fun at the trappings of corruption. But even if the beds are dressed in decent Egyptian cotton and there’s free Wi-Fi, “it’s not the kind of place you come for relaxation,” Salsaa admits.

The situation in Palestine is unusual, for after 51 years, this is the longest military occupation in the world today.

Instead, a stay at the hotel is intended to provide an understanding of the plight of the Palestinians and there’s even a quasi-museum comprising maps and timelines that date back to the Balfour Declaration, which in 1917 paved the way to the creation of Israel. “Visitors can learn about the illegal colonies that Israel is building, how they’re turning Palestine into an open-air prison, the weapons and ammunitions that they’re using against unarmed civilians, the companies who supported building of the wall, as well as the water issues we face,” Salsaa explains. “One often unexpected highlight for many is the collection of statements by Israeli soldiers, who talk about the many crimes they witnessed while serving in the army. The situation in Palestine is unusual, for after 51 years, this is the longest military occupation in the world today.”

Beyond this, there’s a touch of glamour, courtesy of artists Banksy, Sami Musa and Dominique Petrin. And that’s not the only stardust: when the hotel opened just over a year ago, Elton John performed live from Los Angeles, inaugurating the hotel with some choice words and a private piano performance beamed straight to the hotel’s piano bar.
Since then, the dystopian tourist attraction has garnered plenty of attention and brought positive economic benefits to the small city, which is a popular destination for pilgrims visiting the Church of the Nativity. According to the United Nations World Tourism Organization (UNWTO), the occupied territories witnessed a 57.8 per cent rise in international arrivals so far this year. “Some papers, like the Telegraph in London, attributed that to The Walled Off Hotel,” Salsaa says before explaining how they’re engaging with locals too via lively musical nights on Saturdays and a robust art programme that also includes competitions, such as ‘To Our Future’ that remains open to all Palestinians before its deadline closes on April 25th. 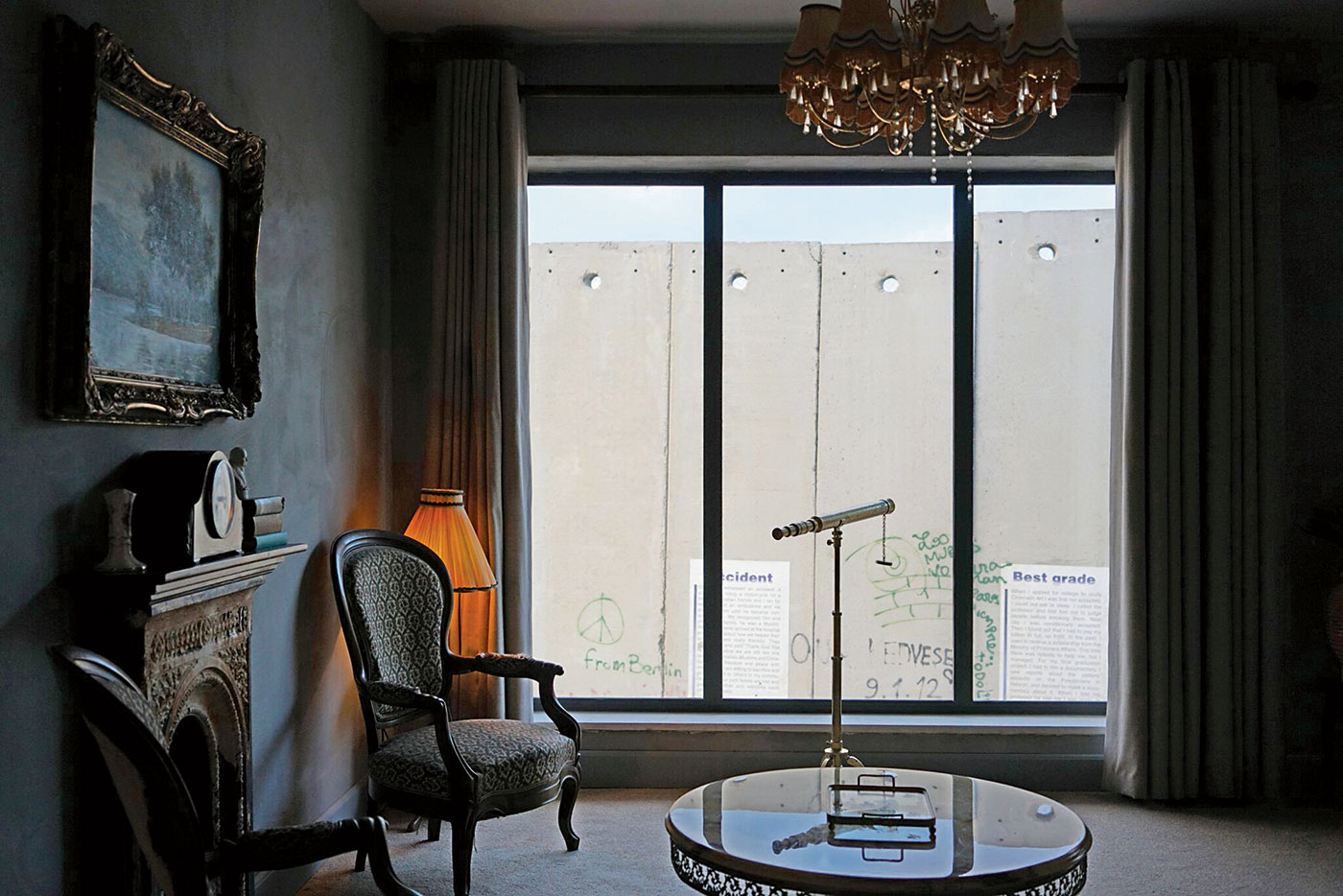 Finally, and perhaps in an homage to Banksy’s suspected nationality, a British afternoon tea is served in chintz china and includes scones, sandwiches and all. It’s an eccentrically hotchpotch approach but if one thing is for certain, Banksy may be a mystery man, but even from the shadows he has a knack for being heard.